Often your organization may have multiple support team and departments. And you may want to have an independent/parallel Team Issue Tracker setup (with their own drop down lists, destination SharePoint ticket lists etc) for each of the team or department.

For instance, if you have 5 departments, you can configure issue tracker to have its own destination lists and settings. In technical term, it would mean, you will have to configure 5 subsites of your SharePoint site such that each subsite can have the list ‘TeamIssueTrackerSettings’.

And you want to have 5 parallel and independent Issue Tracker for each department. So, you will setup 5 different TeamIssueTrackerSettings list on 5 different sharepoint sites or subsites.

Typically, for each department, you will have to install the admin tool on a system of that department and configure the settings/link to the SharePoint. So, if you have 5 departments, you will install the admin tool to 5 different systems to administer the helpdesk. If you want to setup and administer all these parallel/independent instances from the same computer, then you can do so by simply going to Outlook > Team Issue Tracker toolbar > Team Settings > Configure Helpdesk Settings Data Source and clicking ‘Browse’ button to point to the particular department subsite to select the ‘TeamIssueTrackerSettings’ list. 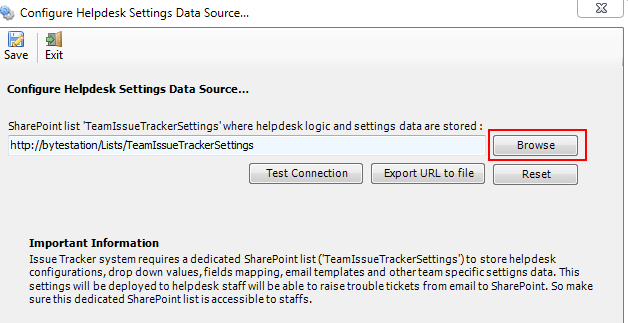 Previous Fix to ‘Microsoft.SharePoint.SoapServer.SoapServerException’ error when searching tickets or accessing ‘My Tickets’ panel in Outlook
Next The Issue Tracker toolbar is no longer visible, though it is installed.