Skip to content
February 20, 2019 AssistMyTeam
You are here:
< Back 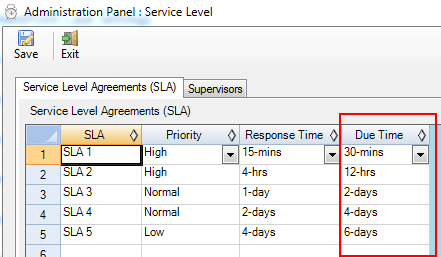 Response Time –  duration within which the assigned technicians of the case should have responded to the caller for the first time (after the case was logged). When a SLA is enforced to a case, the response time of that SLA would be adjusted (added) to the ‘Respond By Date’ field. If the case was not responded within the stipulated SLA response time, a SLA breach (on response time lapsed) would occur and an automated notification would be sent to the supervisors.

Due Time – duration within which the assigned technicians should have closed (mark complete) the case. When a SLA is enforced to a case, the due time of that SLA would be adjusted (added) to the ‘Due Date’ field. If the case was not closed i.e., mark competed) within the stipulated SLA due time, a SLA breach (on due time lapsed) would occur and an automated notification would be sent to the supervisors.

You will also find a new field ‘Response By Date‘ available (just above the due date field) in the case form.

The manager can set an initial response time by manually specifying one after the case was raised, or a default date/time could be set under Team Helpdesk Manager > Automation Options > New Case tab. 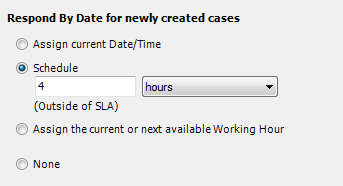 Or, the manager can enforce a SLA to the case so that the ‘Response By Date‘ field is adjusted automatically with the response time (as specified under Team Helpdesk Manager > Service Levels).
Additionally, the manager can also enable automated alert to the assigned technicians when the case was not answered/responded to within the response time. You can enable this alert under Team Helpdesk Manager > Notification Options > General Alerts tab.

Further more, the manager can set Team Helpdesk to send out of the automated alerts to the technicians when the response/due time has lapsed or when it is about to lapse in few hours ahead (under Team Helpdesk Manager > Notification Options > Other Options tab). With the latter option, you can have the assigned technicians know about the response time warning well before a SLA breach could occur, thus avoiding escalation to the supervisors. For example, below, the alert on response time lapse on the cases is set to be sent to the technicians 3 hours before the time will lapse. 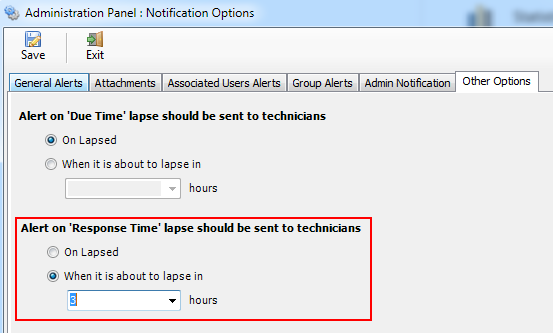